A young Ipswich driver who was punched so hard by a road-rage fuelled driver that his front teeth nearly fell out is too afraid to go outside alone.

Hayden Utz was driving through the roundabout at Riverlink at around 10am on Wednesday, when the driver of a black Honda SUV began veering into the wrong lane.

The 20-year-old beeped his horn to let the other motorist know he was too close; however, much to Mr Utz’s shock, the driver began following him.

As Mr Utz pulled up at the set of lights at the intersection Mount Crosby Road and Tantivy Street, the driver of the SUV smashed into the back of Mt Utz's car, got out and started punching him.

“He was pummelling me in the face through the window,” Mr Utz says.

“All I could do was try to protect my face.”

Mr Utz has been left with bruises and cuts to his nose and mouth, and his two front teeth have been knocked out of place, which a dentist has estimated will cost a significant amount to fix as braces might be needed.

Mr Utz’s car, which he had only purchased the day before, has also been badly damaged.

Police are still hunting for the driver of the SUV who got back in his car and took off, leaving Mr Utz feeling shaken and sick.

“I just want to thank all of the people in the public who came to check on me.” 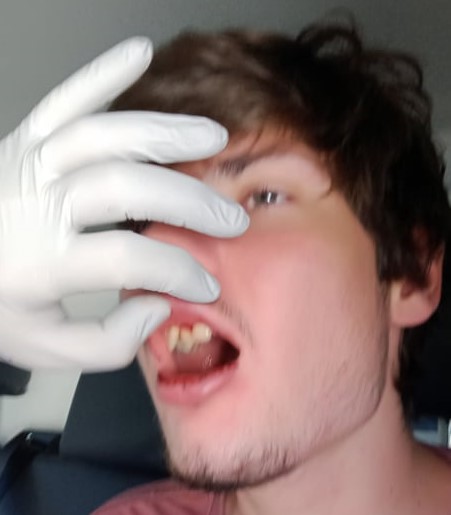 A Queensland Police spokesperson says they are investigating the assault and are looking for the other driver.

“Upon arrival, they [police] located a 20-year-old man with facial injuries, after he was allegedly assaulted by the driver of a black Honda SUV following the crash.