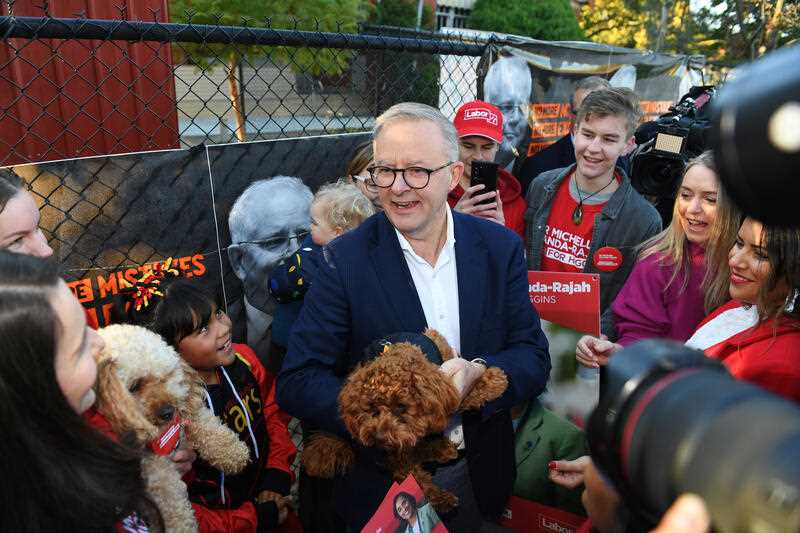 Labor has won the 2022 federal election and will form either a minority or majority government with Anthony Albanese as Australia’s next prime minister as several key seats remain in the balance.

Voters have deserted the major parties in their droves as the federal election ballots continue to be counted.

Mr Albanese says he hopes his journey can act as an inspiration for others to “reach for the stars”.

"I want Australia to continue to be a country that no matter where you live, who you worship, who you love or what your last name is, that places no restrictions on your journey in life,” he says.

"We are the greatest country on earth," he told a parochial crowd of Labor faithful.

“But we can have an even better future if we seize the opportunities that are right there in front of us.

“The opportunity to shape change, rather than be shaped by it.

“And we can shape change more effectively if we seek to unite people on that journey of change.

"Together we can end the climate wars.

“Together we can take advantage of the opportunity for Australia to be a renewable energy superpower.

“Together we can work in common interests with business and unions to drive productivity, lift wages and profits. I want an economy that works for people, not the other way around.”

Scott Morrison has called Mr Albanese and conceded defeat and will resign as leader of the Liberal Party.

"To my colleagues tonight, who have had to deal with very difficult news, and have lost their seats tonight, I as leader take responsibility for the wins and the losses,” he says.

"That is the burden and that is the responsibility of leadership.

"As a result I will be handing over the leadership at the next party room meeting to ensure the party can be taken forward under new leadership, which is the appropriate thing to do.

"It's a difficult job for Liberals and Nationals around the country as nights like this always are. They are humbling but so is victory. Victory is always humbling and always should be," he says.

“Tonight, I have spoken to the Leader of the Opposition and the incoming Prime Minister, Anthony Albanese. And I've congratulated him on his election victory this evening.”

Mr Morrison acknowledged there were pre-polls and postal votes to count.

It's clear at this stage that the Coalition will not be able to form a majority government as independents made gains in previously safe Liberal seats.

Voters have turned instead to the much talked about teal independents and the Greens across the country.

There is still a chance Labor can form a majority government if it picks up seats in Western Australia and other seats across the country that remain in the balance.

Either way, Anthony Albanese will be sworn in as Australia’s 31st prime minister.